Most of the time it happens that we make great plans out of excitement or just for the sake of it because planning is very easy but we fail to execute those plains because of several reasons. Right from the beginning of this week, me and my colleague had been planning to ride somewhere on weekend. We were first thinking to ride to Wayanad, Kerala which is close to 670km from Chennai but I found it a bit long for a weekend ride because we would have ridden on Saturday and I wanted to be back by Sunday night which means no time to actually see the place. So I suggested Yelagiri Hills which is about 235km from Chennai and easily doable in one day. We can even ride back the same day and that’s what I was planning to do. As Wiki says, Yelagiri is a hill station in Vellore district of Tamil Nadu and is surrounded by orchards, rose-gardens, and green valleys.

So I started looking at the route on Google maps. The route was fairly easy and a known one because I have ridden on this road several times. 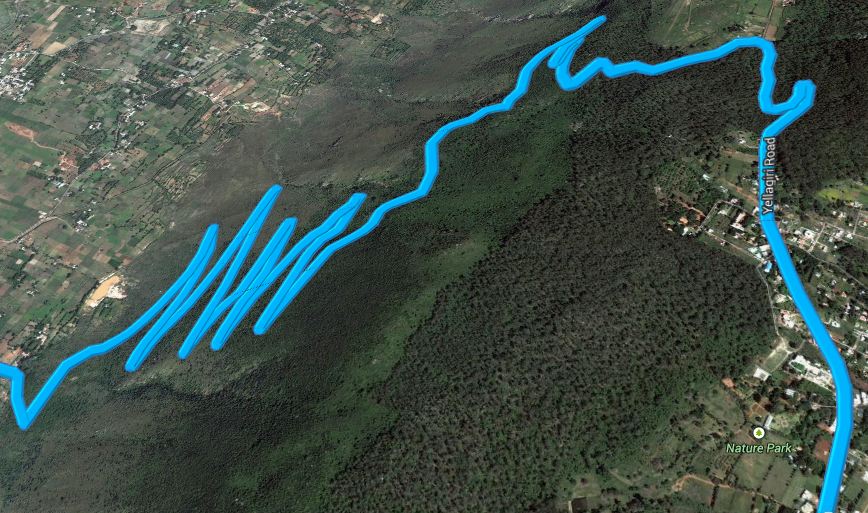 As we approached the weekend, what I expected actually happened. My colleague backed out saying he had to go to Bombay urgently. But this time I didn’t want the plans to fail and I had already decided whether he is coming or not I am definitely riding.

Also my ViaTerra Velox had had arrived surprisingly after one day of ordering it. Carrying stuff while riding is much easier for me now. 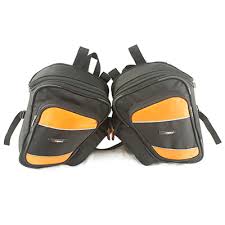 Either or both of these two bags can be used while riding. I took only one of them and decided to observe their performance and utility while on the ride. Fitting it on the bike was like a piece of cake because these are specifically made for KTM Duke motorcycles(200 and 390) and it takes only 10-15 seconds for each bag to fit on the bike. Removing it from the bike is also very easy.

I also carried a GoPro camera borrowed from my friend. So at 06:45 am trying to fit the camera on the bike but unable to figure out certain mounting techniques because I was using it for the first time. Finally after spending some time on it I was able to properly fit it on the handle bar of my bike. I started riding at 07:20am.

I usually don’t take many stops on a ride. I kept riding and after covering about 100km I started feeling very hungry and stopped for breakfast. Meanwhile I was also manually clicking pics and videos of my ride on the GoPro. I felt there is some issue with the cam because it was not recording full length videos and was stopping after 11 seconds of recording. I figured that out much later. 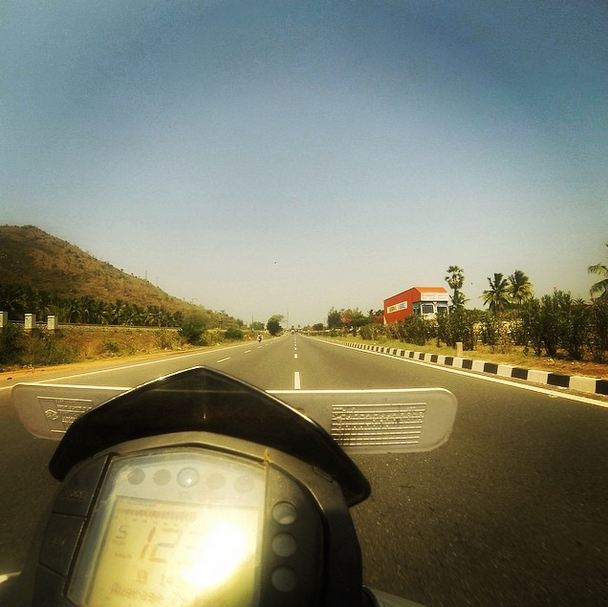 So after breakfast I stopped for fuel and this was about 70km from Vellore which is about 133km from Chennai. A complete full tank(9litres) on KTM 390 takes me to a distance of 215km on highways. 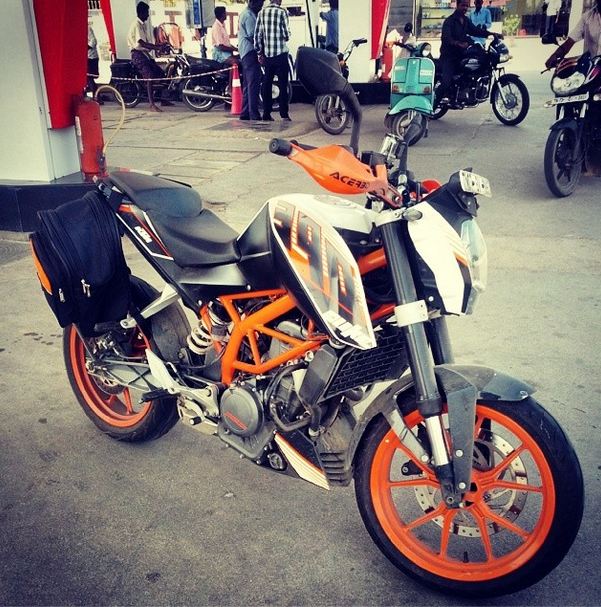 I continued riding and the destination was not that far away now. I was doing good speeds of 130-135kmph and it’s just a pleasure to ride this bike. The acceleration is very quick and the engine can easily do these speeds throughout the day without taking much strain.

Meanwhile I had kept my DSLR bag in the Velox because carrying it on my back was causing me slight pain. And the Velox could take the medium size SLR bag in it with still some place left for gloves, a water bottle, keys. Riding became more relaxed after I took the camera bag off my back.

I tried to chase a Porsche Carrera for some time but then I let it go :P

So while doing these speeds, I managed to miss one turn for my destination and went much ahead of it. Ya right.. 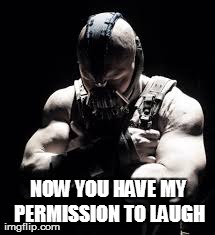 So much that I went almost 50km ahead of Yelagiri hills and I kept wondering what the hell just happened where the fuck is the turn I am supposed to take. Bangalore was just 90km from the place where I stopped to do some ride-meditation! I took my phone out and checked for directions. Yes.. I had come way ahead. It’s okay.. people make mistakes. 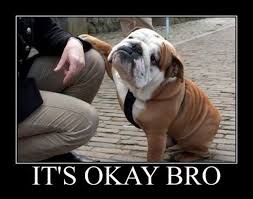 It was around 11:30am the timing I started heading back and in the correct directions. I enquired a little around and got to know that Yelagiri is almost 45km from the place I was. So what! We will ride.
It was around 12:30am when I reached the bottom of the hills and started climbing up. The route uphill has 14 hairpin bends and I was excited about it. It’s usually cold but it was very hot when I was riding.

Some pics of the view while riding uphill. 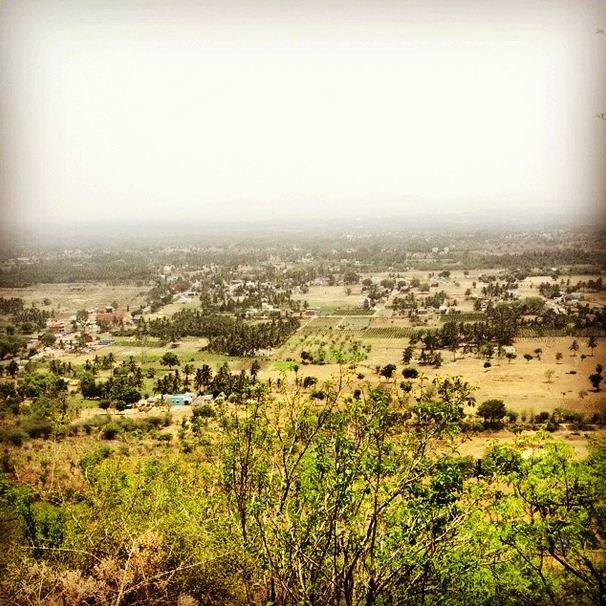 After taking a look down the valley when I looked back, I saw another beautiful view :P 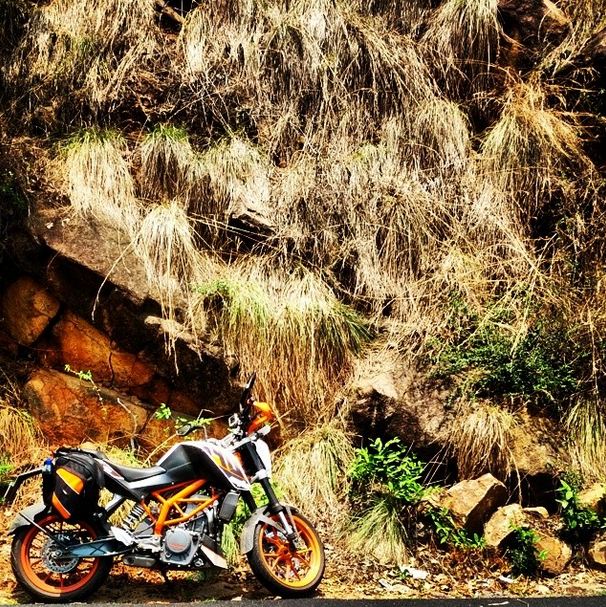 Good opportunities for leaning as well! 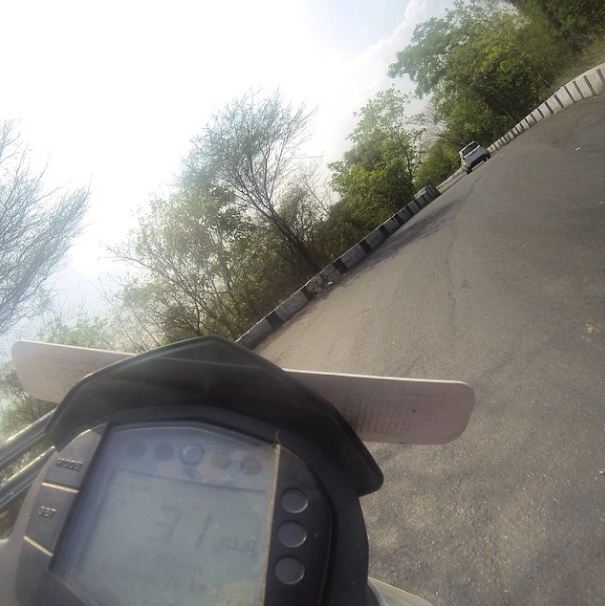 Yelagiri is a great place to go trekking and there are several hills which require short treks to reach to the top and it offers a great view. However I didn’t have that time at my hands and I had to head back. I reached the Punganur Lake. It’s an artificial lake and now it has become a picnic spot and you can go for boating here. 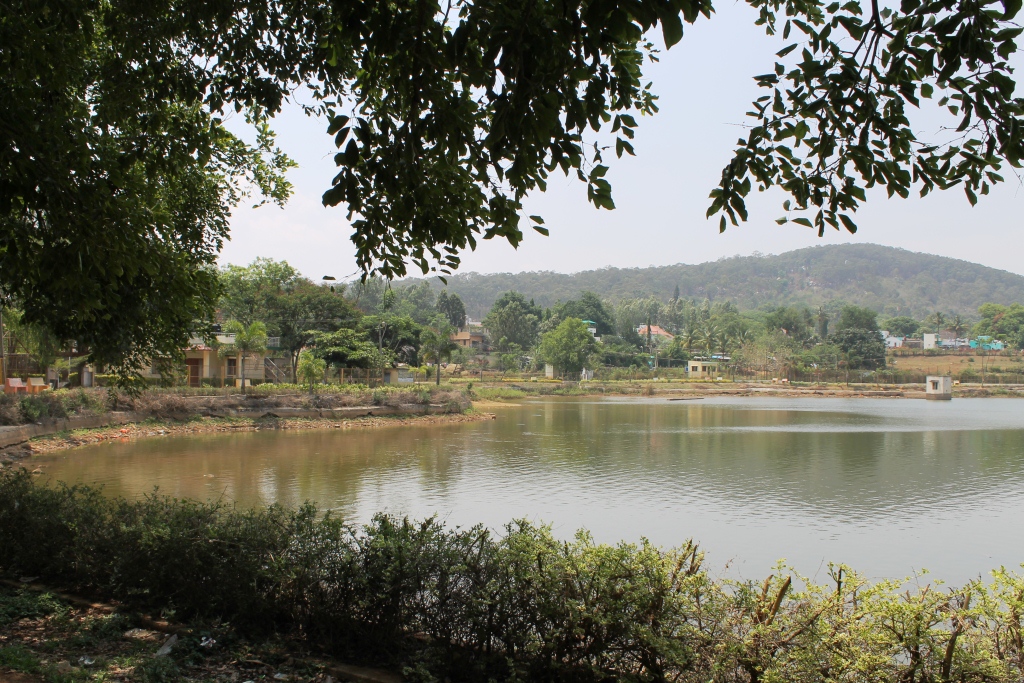 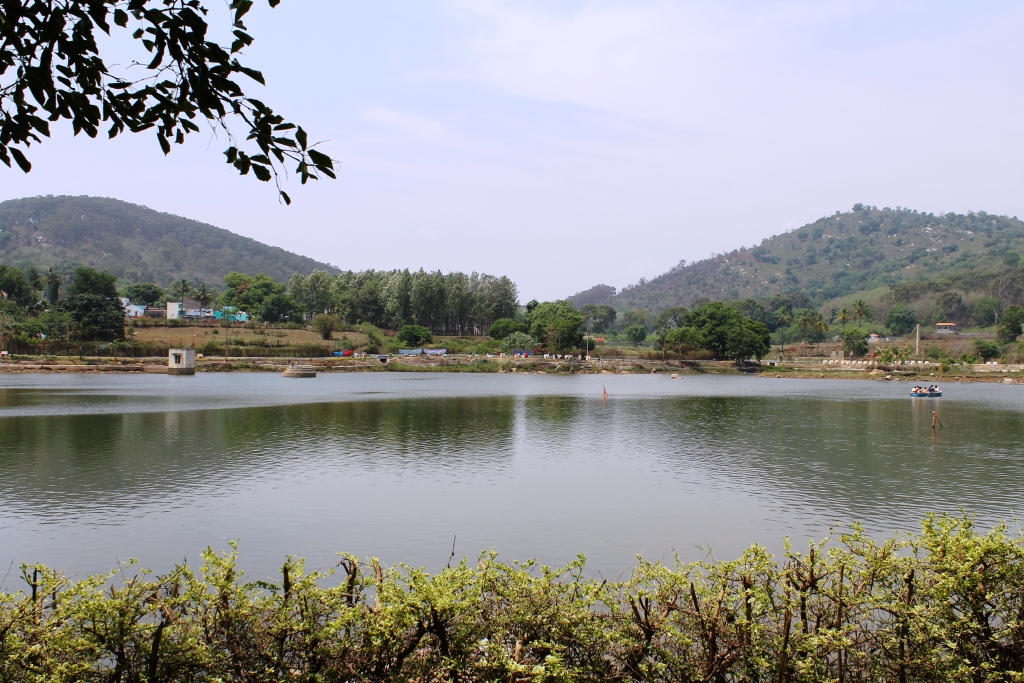 It was about 2:00pm and the time to head back. I had wasted enough time already in covering the extra 100km. Any more waste of time now meant reaching home after sunset which I definitely did not want. I also figured out the settings of the camera by now to take full length videos.
Riding down the hill was also fun and I was able to lean at the corners recalling the skills I learnt on the track day J [KTM Track Day]

I started riding back and again I did not want to stop for lunch before 3:30pm. I continuously rode for 180km and decided to replace lunch with refreshments at the regular CCD we generally stop at while riding back on that route. I reached here at around 4pm. It was so hot that I wished it rained! 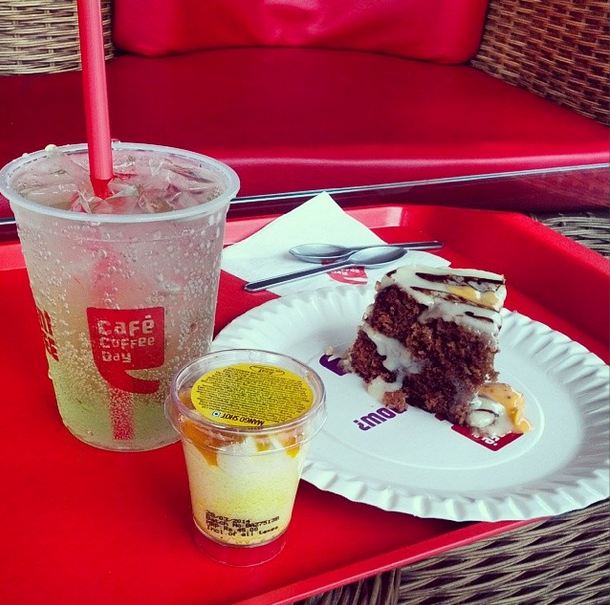 I took some rest here for 35 mins and started gearing up to ride again and noticed that it had started raining heavily. Just what I was hoping for. So I covered my luggage bag with the raincover which came with the bags and started riding again. 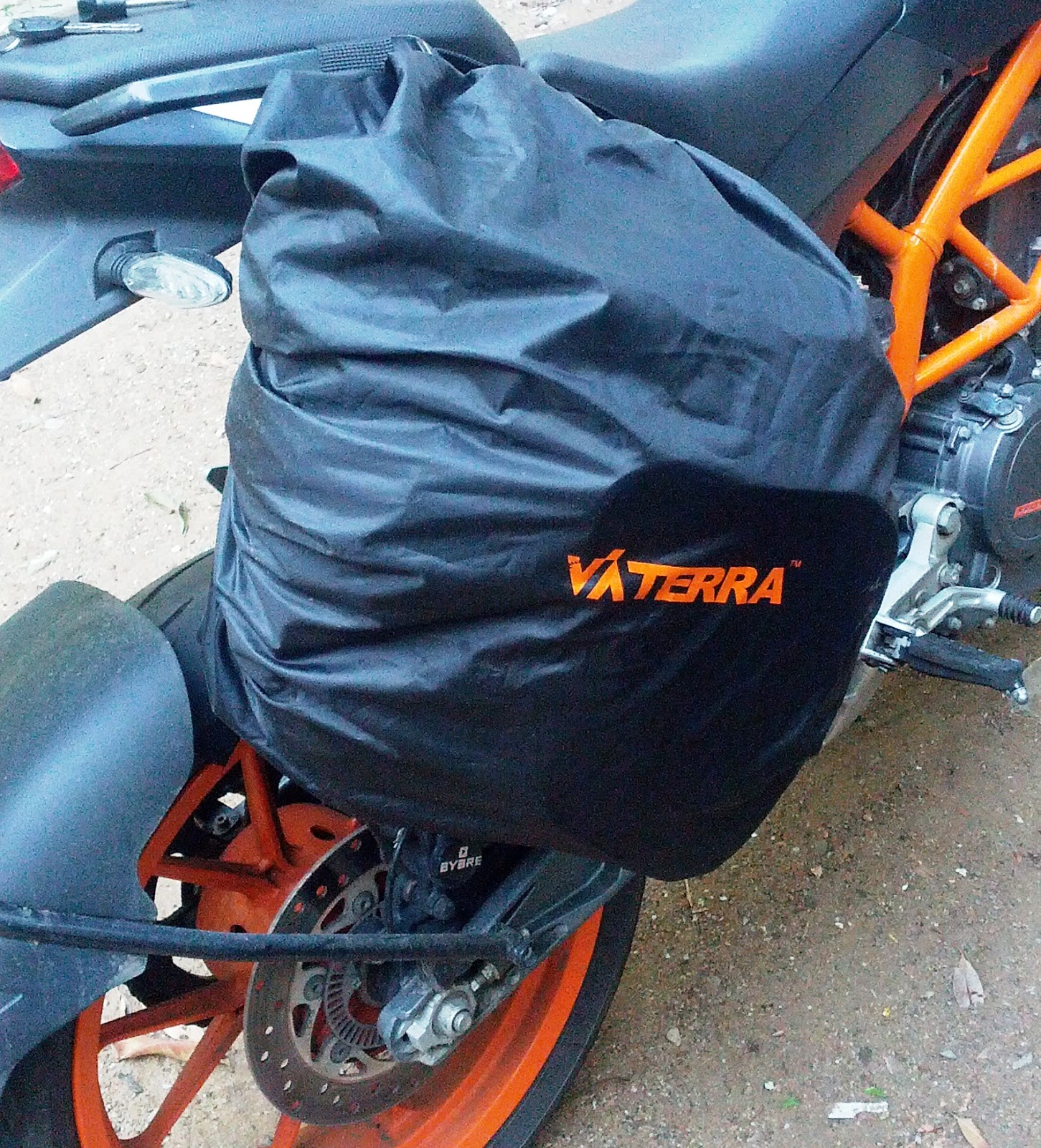 But just after 10 minutes the rain stopped and it was dry again. However it did bring some relief from the heat. Chennai was about 80km from here now there was no stopping. I reached home at sharp 6pm well before the sunset J

Here is a nice video of the ride downhill I was able to capture. It’s a 4:44 min video and please watch it and see how much fun can hill-roads be J

Solo riding clears your mind of the worldly stress. It brings you closer to your inner self and gives you the much needed change from your daily routine. I’m glad I was able to stick to the plans and went for this ride. Hope you enjoyed reading this travelogue. Ride Safe.
Posted by Unknown at 04:15

My Most Popular Posts!

You are visitor no. :